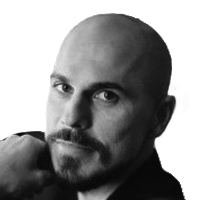 Yevgeniy Kolesnyk is a former Principal dancer with Royal Ballet of Flanders.

Yevgeniy studied in the Vaganova method and graduated with honors from the Kiev National Ballet School in 1997.  He then joined the Kiev National Opera House’s corps de ballet, and was promoted to soloist after his first season.  During his three years with the company, he performed many featured roles in classical productions, such as: Coppelia, Giselle, Chipolino, the Nutcracker, Swan Lake, etc.

Yevgeniy was awarded the gold medal at the International Ballet Competition “Serge Lifar de la dans“, and the First prize at the International Ballet Competition “Arabesk” in Perm, Russia.  In 2000, he joined the Royal Ballet of Flanders’ corps de ballet under the direction of Robert Denvers. He was promoted to half-soloist that season after successfully performing the role of D'artagnan in Prokovsky’s ‘ Three Musketeers” on a US tour.  He continued performing with the Royal Ballet of Flanders for 16 years, rising to the rank of Principal dancer. His final performance with the company was the ballet, “Exhibition”, by Sidi Larbi Cherkaoui in 2016.

The highlights of his dancing career as a classical dancer include: D'artagnan in “Three Musketeers”, Yevgeny Onegin in Cranko’s “Onegin”, Albert in Robert Denvers’ “Giselle”, Basilio in “Don Quixote”, Solor in “Bayadere”, Prince Desire and Carabosse in Marcia Haydee’s “Sleeping Beauty”, Rothbart in Marcia Haydee’s “Swan Lake”, and the lead role in Balanchine’s “Theme and Variations”.

Currently, Yevgeniy enjoys passing on his knowledge and experience to the next generation of dancers who are eager to learn more about the art of ballet.  For the upcoming season, he will be teaching in the Antwerp Conservatory at de Singel and in Dansstudio Arabesque.