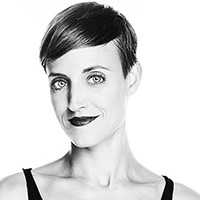 During two years freelancing in Houston, she trained with Robert Underwood.  Robert greatly supported and inspired her with his out-of-the-box approach to classical ballet.

Ginny Hendricksen’s professional dancing career began at age 19 in William Forsythe’s Ballett Frankfurt. She danced in Frankfurt for two seasons in a range of contemporary and modern works, and was introduced to his improvisation technique.