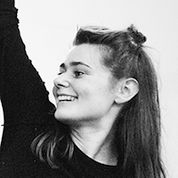 Steffi started dancing at Dansstudio Arabesque when she was 4 years old. In 2008 she started her professional contemporary dance education at Dé! Kunsthumaniora in Wilrijk (BE).

In 2013 she joined the youth company Impuls Company at Geel (BE), led by Natascha Pire, for one year. They were appointed Belgian Ambassador of Contemporary Dance through the dance competition DansImpact (BE) and performed at the dance festivals TANECTANEC JABLONEC (CZ) and PACTT Dance Festival (BE).

In 2014 she continued her education at the two year program The Maslool Professional Dance Program in Tel Aviv (IL), where she worked with choreographers such as Noa Zuk, Ella Rothschild and Idan Sharabi. In 2016 she and her classmates were part of dance festivals Julidans and ITs Festival in the Netherlands. At the ITs Festival they won the prize for Best International Group 2016.

As a professional dancer Steffi worked at GrossDanceCompany (NL), led by Sagi Gross, in 2016 and 2017. She was part of the project 'What do we know'.

In 2017 and 2018 she developed a close collaboration with choreographer Talia Beck. Steffi assisted her during the creation process of 'Shuli' as well as during several workshops. As a dancer she performed in Beck's work 'Colonia', created for the Curtain Up Dance Festival 2018 (IL).

Since 2019 Steffi has been exploring her potential as a maker. Together with Jenneke Slaets she created 'Running Late' with which they are part of the In De Maak Festival 2021 (BE).

Next to her career as a dancer Steffi also teaches modern dance classes at Dansstudio Arabesque and studies Dutch and Theatre, Film and Literature Science at the University of Antwerp (BE).