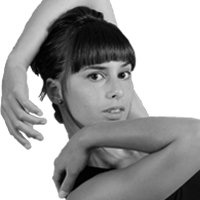 After a classical dance education, Audrey Pascal (F) obtained a diploma Jazz dance at the EPSE Danse in Montpellier, led by Anne Marie Porras, Deug2 STAPS at the university of Créteil and a Pilates diploma.

She was a dancer for the artist ZAZ.

She took part in many festivals and won a golden medal at the dance competition Charleville-Mézière in group with the New Espace Danse school. In 2010 she won the contest Made by Belgians and also received the price of the public.

Audrey is also a choreographer