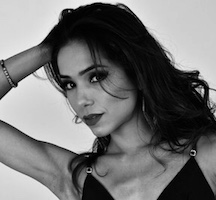 Luana Espíndola born in Brazil, is a dancer, teacher and choreographer.

She has toured all over Brazil, with important works such as: “Novos Ventos”, “Tango Sob Dois Olhares”, “Caminho da Seda” e “Cartas Brasileiras”.

As a choreographer and dancer, Luana Espíndola won awards at the most important festivals in Brazil and abroad (Gold medal Tanzolymp). She attended courses in New York and taught courses in Germany and Belgium.

She also participated in the Lyon Biennale in France.

Since 2013 she participates in the Congresso Internacional de Jazz Dance. 2016, and 2017 she taught masterclasses in the same event.

She is a choreographer, teacher and judge in various Dance events in Brazil and abroad.