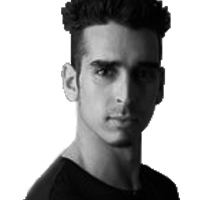 Junes Lazaar (1987) had first dedicated his life to dancing. He started his dancing career when he was 16 y/o . He began as a breakdancer and soon learned different styles such as Hip Hop , street dance , pop & lock and tap-dance. He made his debut as a dancer in 2010 when he got through to the finals of " so you think you can dance " Belgium- Holland. He went solo and also collaborated with different professional dancers and made it through to the finals of Belgiums got talent as " Co.Lab". While being on stage he discovered his passion for acting. He started of playing little roles in "Bergica" ( short comedy series), "De ridder" ( First serious but still small role) . "De bunker" and more. His debut as actor would be the movie Patser . The movie will be released on the 24th of January 2018. Junes was lucky to be one of the 4 main leading roles playing in this movie. He considers himself to be happy for this opportunity . The movie was created by Bilall Fallah and Adil El Arbi. They are Belgians from Moroccan roots who combined their strength to create movies. They have been producing in Belgium and Hollywood. ( Netflix series Snowfall) And soon more to come.
Junes teaches Hip Hop at Dansstudio Arabesque since 2018.