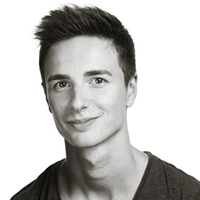 Jan Casier was born in Belgium. He studied at the Royal Ballet School in Antwerp. From 2008 to 2012 he was a member of the Royal Ballet of Flanders where he danced in ballets by John Cranko (Lensky in Onegin), Marcia Haydee, William Forsythe, David Dawson, Christian Spuck, Jorma Elo and Nicolo Fonte. He appeared in David Dawson's Faun(e) as a guest artist at the English National Ballet. From 2012 to 2014 he was a member of the Ballett Zürich, where he performed roles in numerous Christian Spuck ballets, including Leonce in Leonce and Lena, Paris in Romeo and Juliet, and the title role of Woyzeck which he was nominated for a Critics Choice Award 'Dancer of the year' by the German Tanz Magazine. He also danced in choreographies by Edward Clug, Sol León/Paul Lightfoot, Marco Goecke, and Wayne McGregor. From 2014 to 2016 he was a member of the Semperoper Ballett Dresden. There he performed in choreographies by Aaron Watkin (Prince in The Nutcracker), Sir Kenneth Macmillan, William Forsythe, Alexei Ratmansky, David Dawson, Stijn Celis and Alexander Ekman. Jan has also been part of numerous ballet gala's in Germany, Italy, Belgium and Taiwan. He returned to the Ballett Zürich as a soloist in 2016. Since his return, he has danced in ballets by Christian Spuck (Drosselmeier in The Nutcracker), William Forsythe, Jiri Kylian, Jacopo Godani, Crystal Pite, Hans Van Manen and performed the title role of Faust - The Ballet by Edward Clug and the title role of Nijinski by Marco Goecke.