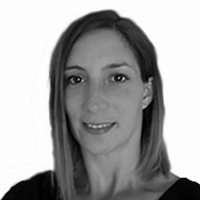 Aline started dancing in a private school in La Louvière, after which she was admitted at the age of 9, at Royal Ballet School of Antwerp.

During these years at the school, she worked together with choreographers Marlière Andree, Aime Lignière, J.Brabants, Kenneth Macmillan and Hugo Fanari.

At 18, Aline was admitted at the Higher School of Arts in Arnhem, the Netherlands. Very soon she was offered a trainee contract with the renowned dance company Introdans, where she danced in various ballets by Jirí Kylián, Hans van Manen, Nils Christie, Carole Armitage and William Forsythe.

In 2003 she returned to Belgium and joined the Royal Ballet of Flanders until 2009. She sparkled in ballets such as: Giselle, La Bayadère, Swan Lake, The Sleeping Beauty, Themes and Variations, but also in the contemporary productions of the choreographers William Forsythe , Christian Spuck, David Dawson and Jacopo Godani.

In 2010 she decided to start a career as a classical dance teacher at the Namur Conservatory and the Dinant Academy.
Since September 2015 she has joined the faculty team of the Grétry Academy and Artistic Humanities.